Home > Driving Crimes > What are the hit and run laws in California?

Car accidents are not uncommon, which is why it’s important to familiarize yourself with the traffic and accident law in your state. Hit and runs occur when the person at fault leaves the scene of the accident without providing contact or insurance information with another driver involved. However, it’s also possible to have fled the scene without knowing that a vehicle crash occurred.

A hit and run is a serious offense, and knowing the law will help you protect your rights in the event of an accident. Read on to learn more about what’s considered a hit and run, what the possible defenses are, and what penalties are incurred by a conviction.

California traffic law requires drivers to do the following after a car accident:

Note that your duty to stop at the scene of the automobile accident applies regardless of whether you or the other driver is at fault.
If you crashed into a parked vehicle (or any type of private property) and the owner isn’t around, then you’re expected to leave a note explaining the circumstances of the traffic accident along with your contact information.

Not following these actions after an auto collision counts as a hit and run under the traffic laws in California. This includes:

If you were involved in a vehicle collision, you should talk to a car accident lawyer as soon as possible.

Is it considered a misdemeanor or a felony? 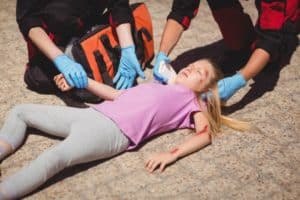 Hit and runs can be charged as either a misdemeanor or felony depending on whether or not someone was injured in a car accident. Hit-and-run driving accidents that only caused property damage are considered misdemeanors. However, if it caused injury or death to the car accident victims, then it can be filed as felony charges.

What are the possible defenses for a hit and run?

To be convicted of a misdemeanor hit and run under accident laws, the prosecution has to prove each of the following:

Note that civil compromises can no longer be used in a misdemeanor hit and run cases, as stated by the California court. If you’ve been charged with a hit and run, there are several legal defenses you can use. These include proving the following:

Seeking legal counsel from an auto accident attorney is essential to ensure that you have a good defense prepared when you face the charge against you.

What are the penalties for a hit and run?

Getting a conviction for auto accidents like this is punishable by a fine of up to $1,000 and imprisonment for up to six months in the county jail. However, this only applies to misdemeanor hit and run accidents. If the traffic collision caused death or serious injuries to accident victims, then getting convicted is punishable by one to three years of jail time, depending on whether it was charged as a misdemeanor or a felony.

If you are involved in a hit and run or car crashes, or know someone who is, it’s important to get legal representation as soon as possible. Having experienced personal injury attorneys by your side will help you protect your legal rights in a car accident case. Contact our office at the Law Offices of Marc Grossman and schedule a free consultation today!